The Rebel Legion is a worldwide costuming organization of Star Wars fans; a fan-created organization dedicated to the creation and wearing of screen accurate replicas of Rebel or “Good Guy” costumes from the Star Wars universe. 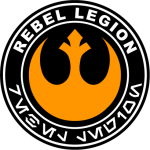 Legionnaires can often be found assisting at promotional events for almost anything related to Star Wars – frequently putting their “fame” to use at numerous charity, educational, and philanthropic events throughout the year.

Founded in 2000 by Tony Troxell, the Legion has grown to become Lucasfilm Ltd.’s preferred “Good Guy” costuming group. Over the years, the Legion has trooped in all types of events, most notably appearing in the 118th 2007 Rose Bowl Parade as part of the Star Wars Spectacular. The Legion was initially formed from, and as a reaction to, the 501st Legion’s “Bad Guys.” As of 2007 the Legion had a membership of over 2000 members.

Across the globe, the Legion is divided into local “chapters” called Rebel Bases, with jurisdiction over regions of varying size (anywhere from portions of a state, statewide, multi-state to national or multi-national).

For more data on the Legion, it’s Costume Standards, and how to join, please visit: www.rebellegion.com